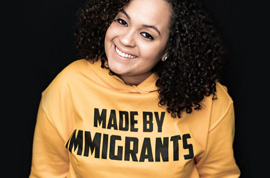 When Tamar Reyes-Fernandez’s family came to the United States from the Dominican Republic, it was important to her parents that their children speak Spanish and remain connected to their roots. At first, she resisted their efforts—sometimes going out of her way to speak English at home.

But today, as a Spanish teacher and soon-to-be parent of two bilingual children of her own, Tamar shares her passion for Spanish language and culture with students at KIPP Newark Collegiate Academy. There, she has found support to grow her teaching practice and her leadership skills.

What inspired you to teach—and in particular, teach Spanish?

Teaching runs in my family. Both of my parents were teachers in the Dominican Republic. When they came to the United States, and then had children we had to speak Spanish at home, but I learned English through immersion and I grew to prefer speaking English.

When I started my undergraduate degree in education, I had to pick a core subject. At first, I wasn’t sure what I wanted to do, but I decided to take a Spanish class. That was where I had my eyes opened to Spanish and Latin American culture and history—and became grateful my parents encouraged me to speak Spanish at home. I knew teaching Spanish was the right choice.

Why did you choose to teach at KIPP New Jersey?

Prior to KIPP, I was teaching at another charter school that I joined right out of college. I was the only Spanish teacher and I taught everyone in grades 9-12. I learned a lot, but at the end of five years, I knew I wanted to work as part of a team and receive feedback that would help me become an even better teacher.

From the first day I interviewed at KIPP NJ, I knew I wanted to teach there when I saw the college flags on the walls at KIPP Newark Collegiate Academy. I realized that this was a group of people who really believed in pushing their students no matter what their stories were, or what people told them their stories were.

How did KIPP New Jersey support your growth as a Spanish teacher?

In my first year, my principal spent a lot of time growing me as a person and always pushing me as a leader. He encouraged me to see challenges in my work from a different perspective. That year, my coach sent me to Boston for a professional development conference for Spanish teachers.  I realized the people in my school sometimes believed in me more than I believed in myself. Year two, I became the chair of the Spanish department—and I actually felt prepared for that role.

Now, I’m in my third year and I was deemed AP ready (assistant principal ready).  I’m growing every day to try to become more data-driven in my teaching and I coach five other Spanish teachers. I understand how to coach because I was coached myself and continue to be coached.

Tell us about KIPP New Jersey’s approach to teaching Spanish.

KIPP New Jersey uses the TPRS approach, which stands for Teaching Proficiency through Reading and Storytelling. I came from a very traditional background of Spanish teaching that emphasized students learning grammar and memorizing rules, so I had to be trained to learn how to teach through this approach. I’ve grown to really love this curriculum. The idea is that students who are exposed to Spanish language through reading and conversation will be able to better retain and familiarize students with the language. In the classroom, this looks like a lot of guided conversation exercises, reading texts to uncover vocabulary and understand context, and assessment that’s based on classroom participation.

Too many times, I’ve had people tell me that they studied Spanish for several years, but didn’t retain any of it. This approach is designed to be the antidote to that problem and help students develop a deeper understanding and connections of the language through constant and repetitive application. I’ve seen my students really respond to TPRS because it helps them feel ownership of their learning and gain confidence in their skills.

Tamar Reyes-Fernandez is in her third year of teaching and leading at KIPP Newark Collegiate Academy. She holds a bachelor’s degree in Spanish Languages & Cultures, Latin American Studies and Secondary Education from William Paterson University.

You could be eligible for an increase referral bonus amount of $7,500!